Sid Caesar, TV Comic Who Made Broadway Beg for Mercy, Is Born

Haaretz
This Day in Jewish History, 1922 Sid Caesar, TV Comic Who Made Broadway Beg for Mercy, Is Born. Sid Caesar wanted to be a musician but it was …

Caesar was the youngest of three sons born to Jewish immigrants living in Yonkers, New York. His father was Max Ziser and his mother was Ida (née Raphael). They likely were from Dąbrowa Tarnowska, Poland.[5] Reports state that the surname “Caesar” was given to Max, as a child, by an immigration official at Ellis Island.[6][7][8] This is an urban myth. According to Marian L. Smith, senior historian of the U.S. Citizenship and Immigration Service,,,,,,,

[From “Kovacs Corner” on YouTube.com] – Before video tape, when a live prime time television series went on mid year hiatus, the networks would broadcast “summer replacements”. During the year 1957, “The Ernie Kovacs Show” was the summer replacement program for “Caesar’s Hour”. Earlier known as “Your Show of Shows”, it starred the legendary TV comedian Sid Caesar, with co-stars Carl Reiner and the late Howard Morris. With a writing staff that included among others Mel Brooks, Neil Simon, Danny Simon and Mel Tolkin, it was one of the premier comedy shows of it’s time. This particular sketch satirizes one of the most popular programs of it’s day “This is Your Life” which starred Ralph Edwards and it is, in my opinion, one of the funniest comedy sketches ever performed on television. Howard Morris’ over-the-top performance as “Uncle Goopy” put an audience in stitches 50 years ago and he can do it again with equal ease today! After Kovacs’ untimely death, Sid was called upon by director Stanley Kramer to replace Ernie in the role of “Melville Crump” in the1963 film “It’s a Mad, Mad, Mad, Mad World”

No cue cards, no teleprompters, and no second takes–legendary funnyman Sid Caesar pioneered live television sketch comedy with his 1950s sitcoms Your Show of Shows and Caesar’s Hour. This classic sketch is “Argument to Beethoven’s 5th,” Sid Caesar and Nanette Fabray play a married couple in a argument with pantomimed action and the dialogue is classic music.Enjoy!

This Day in Jewish History, 1191 Richard the Lionheart Defeats Saladin at Arsuf. The seaside skirmish was just one of the battles Saladin and the … 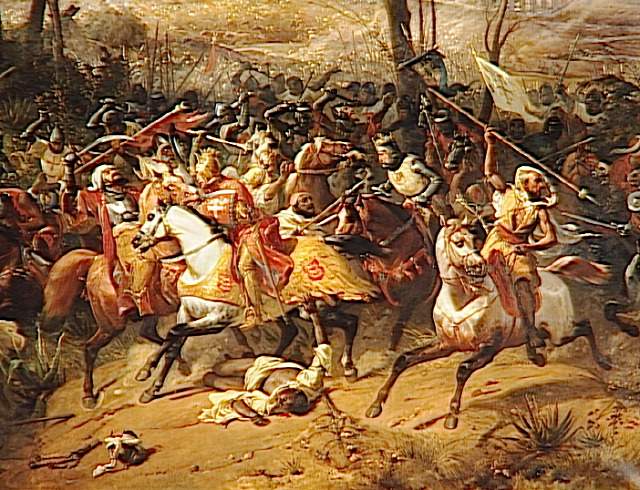 From Wikipedia,
The Battle of Arsuf was a battle of the Third Crusade in which Richard I of England (Richard the Lionheart) defeated Saladin(Ṣalāḥ al-Dīn Yūsuf ibn Ayyūb), founder of the Ayyubid dynasty and Sultan of Egypt and Syria, at Arsuf in Palestine. The forces of the Third Crusade had taken the city of Acre after a prolonged siege. The next strategic target for the Christian army was to secure the city of Jaffa, which would facilitate their ultimate goal, the recapture of the city of Jerusalem.
foto wikipedia,,,Battle of Arsuf ,,,, A map showing the Near East (the Levant) in 1190. ,,,,

My little 3rd Crusade project is complete.
At last, the Saracen leader Sultan Saladin of the Egyptian faction came out from his fortifications with an army. For how long i’v been playing M2TW Kingdoms, i never was able to fight him outside Cairo or any other of his forts & cities, but this time, when i wanted him most, to make the battle of Jaffa, he seemed to grant me my wish & came right where i wanted him, between Arsuf & Ascalon lol. Something like that happens once in a million. As many of u guys know, the town of Jaffa in M2TW doesn’t exsist, so i built a small fortification right between Arsuf & Ascalon where Jaffa is roughy located, & manned it by just a few Crusader Knights. Although Saladin didn’t even bother to besiege it, he stood right next to it with his army. It was then when i took King Richard, a few knights & Crossbowmen, put them on the ships & went to attack him by sea, similar to how it was done for real. BTW for this battle, if u notice, i edited Richard’s chainmail to gold, as if he’s wearing gold-plated mail like many Princes & Kings of the Medieval used to wear. As soon as the battle starts, i charged my Knights streight to Saladin’s larger army, killing many of his men just by the blow of the charge, then pulled back my knights & advanced my infantry while i swung my Knights around & charged them also from the rear. By this time the Crusader Knights from Jaffa arrived & did well in helping me finish of the rest of Saladin’s army & put them to flight. Again, Saladin stayed fighting & got killed which it wasn’t entirely what i wanted for the battle of Jaffa, but he stayed & got what he got, in fact, after he died the remains of his army started fleeing.
The Battle of Jaffa 1192, started as a siege first, untill Richard arrived by sea to relieve his fellow Christians, & tho badley outnumbered, he bravely battled Saladin’s men untill they retreated. It was the last battle of the 3rd Crusade in which all 4 major battles of it were Crusader Victories. When King Richard saw that his few remaining men couldn’t possibly take or hold Jerusalem, & also, recieved the terrible news that his own brother John is supported by King Philip II of France, to usurp his throne, he started retreating to Acre to go home & settle this urgent affair, but vowed to Saladin that he would return with an army soon after. Saladin thought, with Richard away, he could just do as he pleases & took 7,000 men & moved to capture the fortress town of Jaffa, manned by just 80 knights & some 400 infantry. Soon after, the Saracens captured the town & started attacking the citadel which was manned by the defenders. Although Saladin gave expressed orders to his men not to attack the citadel, they started to ignore him & attacked it anyway. During this time, Saladin’s authority among the emirs, was becoming in question after being defeated twice by Richard already. As Richard heard the news, he took some Knights & 2,000 Crossbowmen from Genoa & embarked on his ships but not to go back home but to sail south to relieve their Christian brethren at Jaffa. When Richard landed on the less defended side of Jaffa, he took the Saracens completely by surprise. He & his men fought their way into Jaffa, recaptured it & was welcomed with great joy by his fellow Christian defenders. Suddenly, they all moved out of the town & charged the Saracens, fighting valiantly untill panic lost the Saracen’s nerve & all started retreating against Saladin’s orders. It is said that Saladin always respected Richard for his bravery, but that day not only he respected him but also admired him while watching him fighting in the thick of battle, he also sent him a horse replacement immediatly after Richard’s horse fell by arrows. If his prime enemy ended up in admiring him in awe for his bravery, imagine what his fellow Christians felt for Richard, no wonder his army prevailed in battles. Military sence told him that with so few men, roughly less than 7,000, he couldn’t possibly besiege & take Jerusalem manned by Saladin’s 20,000men, camped outside the city walls. It is normal for a besieging army to have the larger force in a siege, not the much smaller, especially in besieging a large city as Jerusalem & although he vowed to return to recapture the Holy city, he unexpectedly died in France, shot by a Crossbow & never made it home. After the battle of Jaffa King Richard & Sultan Saladin made a peace treaty known as the Treaty of Ramla, that Christians could enter Jerusalem to visit the Holy places, the Crusaders keep their captured lands of Acre, Arsuf, Jaffa & Ascalon & Saladin keeps Jerusalem & so, the 3rd Crusade ended in peace agreed by both Christians & Muslims. However, it didn’t last long.