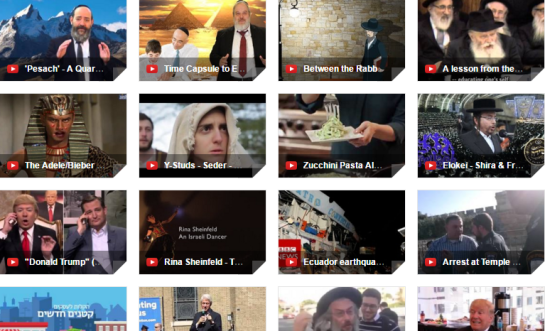 24Jewish Watch What Happens !
‘Pesach’ – A Quartet of Ideas

07.04.2016
Watch this unique presentation featuring Ohr Somayach’s Rosh Hayeshiva Rav Nota Schiller, Rov of Kehillas Ohr Somayach Rav Yitzchak Breitowitz and senior lecturers Rav Dovid Kaplan and Rav Reuven Lauffer. This presentation, delivered on the main campus at Yeshivas Ohr Somayach in Yerushalayim, will infuse the viewer with meaning, values and lessons applicable to Pesach. Enjoy this one of a kind presentation that is sure to inspire and entertain.
Tracklisting –
0:55 Rabbi Dovid Kaplan – Matzah and the Illusion of Life
15:15 Rabbi Yitzchok Breitowitz – Leaving the Mitzrayim Within Us
28:56 Rabbi Nota Schiller – Fourmattering Format
46:07 Rabbi Reuven – “I’ll have a Hillel please”

13.04.2016
The Haggadah tells us to experience Passover as if we ourselves left Egypt, but how is that possible without a time-machine?
Oorah’s Thursday-Thought series continues with a thought-provoking look at the significance of this week, Shabbos Hagadol featuring the COO of Oorah, Rabbi Yitzchok Kornblau.
Short and to the point, guaranteed to fill your week with inspiration.

24Jewish Watch What Happens !
Between the Rabbi and the Lamp Post

31.03.2016
An amazing story between the Chazon Ish and the lamp post near his home brings us to an insightful understanding of the events in this week’s Parshah.
Oorah’s Thursday-Thought series continues with a thought-provoking look at the Torah portion of this week, Parshas Shemini, featuring TorahMates Coordinator, Mrs. Sarah Feldman.
Short and to the point, guaranteed to fill your week with inspiration.

24Jewish Watch What Happens !
A lesson from the Passover Haggadah

15.04.2016
Even when his child is less than “wise,” a father must never give up on him. One must educate all of his children, and see to it that all “Four Sons” come to the table.

This goes beyond one’s own children. We must collectively ensure that every Jew has a place to call home on Passover, and by extension throughout the year.

Featuring Charlton Heston as Moses and Yul Brynner as Pharaoh. You have to see it to believe it.

With thanks to Cecil B. DeMille, Charlton Heston & Yul Brynner

Pharaoh, it’s me
I was wondering if after all these years the Jews you’d free
It’s all over
Everything
You see its time for us to leave ya
I hope there’s no hard feelings

Hello?
I can’t hear you
I think the river needs some cleanin’
It’s turning red
And we’re thirsty
What’s with all these frogs
In my streets?
Locusts flying
I’ve got boils
And this hail is so freaky

There’s not much difference
Between us
Except our million gods.

I ain’t playin pretend, no one’s gonna get away
I hope you brought your swimming trunks
Cuz you’ll need them for the day

Gonna take your gold and silver, eat some matzah and be free,
Then maybe we’ll eat lots of manna.
Yo.

No time for dough to rise, bread of freedom is its name
Leave behind all of the ego and time now has no reign
Fermentation is a process that only happens certain ways
Tasting freedom, now live like a soul.
Yo.

Well I just can’t believe we let them go
Ohhhh maybe we can catch them at the sea
Don’t be afraid lets go and follow them,
I told you, you should have listened to me

Hello from the other side
Free at last in the Sinai
To go get the Torah, Jewish nation is born
Have a Happy Passover.
May you feel freedom down to your core.

Wanna find out more about Y-Studs A Cappella?
Check out our website: http://www.ystuds.com
Buy our EP on iTunes! http://tinyurl.com/zvuzrv2
For Bookings and Inquiries:
US and Canada:
Email- theystuds@gmail.com
Call- 1-917-771-9042

Passover’s tonight, all the guests are coming through the door
Let’s have some fine wine, you say the Kiddush on four cups or more
Wash your hands clean, but with a blessing this time you don’t make it
You grab your greens and dip it in the salt water
but why?
tears from your eyes

The Pharoah’s cruel plan, we realize there’s nowhere left to run
We look to God’s hand, with all ten plagues the damage has been done
We close our eyes, and hope that He’s our ticket to salvation
but all the while, we’re trying to leave Egypt far behind
this is our time

Now at the red sea, it splits so we rush to the other side
Enemies chase us, they’re swallowed by closing tides
(Onward we ride) Am Yisrael Chai

Now say a Bracha, you wash your hands preparing for the food
Reveal the Matzah, eat bitter herbs alone and sandwiched too
Lean to the side, and fill yourself with grub and Afikoman
It’s Bentching time, you welcome Eliyahu at the door
Who’s up for more?

‘Cause this is Seder, Seder night
Connect with our tradition, tell the story of our harsh plight
We’re yearning for redemption at the
Seder, Seder, OW!

We were all once slaves in a foreign land
400 years of sweat, tears, and sand
At the end of the day God chose our nation
To embark on a journey, a mass emigration
With great wonders we were saved from our affliction
Receive the Torah, legacy for generations
Israel ahead, we were on our way
Next year Jerusalem we say until this day
To family and friends we open up our doors
Matzah, Gefilte, Manishewitz galore
That wherever we settle, be a nation of light
That although we suffer, we know God will make right
Song, food, and stories, you just can’t desist
The power of tradition no mere mortal can resist
Four cups later, lean left and you waver
Feel the magic and the wonder of the seder

16.04.2016
As tens of thousands satmar Chasidim gathered for the year’s largest celebration, the annual dinner of 21 Kislev, Shira Choir teamed with world-renowned chazzan Yaakov Y. Stark for a reimagined rendition of the cantorial masterpiece “Elokei” by legendary composer and cantor, Yossele Rosenblatt, of blessed memory.

Accompanied by the extended symphony of Freilach Orchestra with beautiful

arrangements by the one and only Mendy Herskowitz, Stark and Shira executed an awe-inspiring rendition of the cantorial masterpiece “Elokei” .

07.04.2016
Meet Rina Sheinfeld – a dancer, choreographer and teacher who has transformed the Israeli dance scene in the 50 years she has been on stage.

Sheinfeld, formerly a dancer at the Batsheva Dance Company, has her own theatre; she has choreographed 100 dances and performed all over the world. Sheinfeld was deeply affected by the renowned dancer Martha Graham, founder of Batsheva, and considers her to be her spiritual mother.

Sheinfeld recalls her relationship with German choreographer Pina Bausch, to whom Sheinfeld’s new show is dedicated.

17.04.2016
A powerful 7.8-magnitude earthquake in Ecuador has killed at least 77 people and injured more than 500, Vice-President Jorge Glas says. The quake, Ecuador’s largest since 1979, hit at 18:58 on Saturday (23:58GMT) near the northern town of Muisne. Widespread severe damage is reported, with a bridge destroyed as far south as Guayaquil about 300km (190 miles) away.

Introduced as being good.candidates because they vacationed in the Dominican Republic, a short opening jole was made before dealing with a dead microphone. The stump speech included with a lot of policy and took jabs at Donald Trump as well as Senator Bernie Sanders following the debate.

15.04.2016
A 6.2 magnitude earthquake struck southern Japan on Thursday, April 14. The earthquake was felt in the Kumamoto prefecture and there were widespread reports of damages.

This video, shot by a Canadian tourist, shows a crowd reacting to one of the earthquake’s aftershocks.

What are the top stories today? Click to watch: https://www.youtube.com/playlist?list=PLSyY1udCyYqBeDOz400FlseNGNqReKkFd