Singing in memorial outside Bataclan Theater

Celebrate The Third Night Of Hanukkah With Larry Wilmore

08.12.2015
“The Late Show” celebrates Hanukkah with eight nights of videos honoring the festival of lights. For night three, Larry Wilmore reveals that he’s never been invited to a Hanukkah celebration. Can you believe that?

Menorahs Around the World

09.12.2015
Sit back, relax and enjoy, as we bring you some of the most exciting Chanukah celebrations from around the world.

Heads of state across the globe, make a point of recognizing the miracle of Chanukah.

Get the full DVD here,,,,,http://www.jemstore.com/The_Gift_of_Chanukah_DVD_p/z-chanukah-dvd.htm,

From far off places across the earth to being lit in outer space, the Chanukah Menorah has reached some interesting spots.

Israel: The World’s Most Moral Army

07.12.2015
Is the Israeli military a paragon of morality and wartime ethics? Or is it an oppressive force that targets innocent Palestinian civilians and commits war crimes as a matter of policy? Colonel Richard Kemp, who was the commander of British Forces in Afghanistan, was in Israel during its war against Hamas in 2014, and analyzes whether Israel’s military is ethical, evil, or somewhere in between.

This holiday season, are you planning to shop on Amazon? Now you can feel even better about it! Click https://smile.amazon.com and a percentage of every Amazon purchase will be donated to PragerU. Same great products. Same low price. Charity made simple.

“El male rachamim” is a funeral prayer used by the Ashkenazi Jewish community. The chazzan recites it, for the ascension of the souls of the dead, during the funeral, going up to the grave of the departed, remembrance days, and other occasions on which the memory of the dead is recalled.

26.11.2006
Die Kristallnacht, also known as die Reichskristallnacht (literally Imperial Crystal Night), die Pogromnacht and inEnglish known as the Night of Broken Glass, was a massive nationwide pogrom in Germany and Austria on the night of November 9 1938, (and into the early hours of the following day). It was directed at Jewish citizens throughout the country and was the beginning of the Holocaust.
More information:
http://www.ashkenazhouse.org

Kristallnacht… Night of the Broken Glass

Kristallnacht – A Documentary Part 1 of 5

Here is good documentary from the History Channel on Reichskristallnacht, the night of broken glass. On November 9–10 November 1938, all across Germany Jewish businesses were ransacked, synagogues burned down, Jews sent to concentration camps and murdered. It was the first big anti-Semitic event in Germany before the war started. Here the events leading up to it are chroncled as well. The most hard-hitting quote is when it is said that this marked the end of German Jewry. Very depressing…

75 years after the Night of Broken Glass, the U.S. Holocaust Memorial Museum gives survivors the chance to tell their stories.

It was 75 years ago when the Nazis swept across Berlin and Germany, burning Synagogues and reeking havoc. Today we honor that night, and we honor those who suffered with it

It was 75 years ago that Germany’s Nazi Party stepped up its campaign of persecution against Jews over two days of terror known as Kristallnacht, or ‘The Night of Broken Glass’.

It was 75 years ago that Germany’s Nazi Party stepped up its campaign of persecution against Jews over two days of terror known as Kristallnacht, or ‘The Night of Broken Glass’. It was a program (a series of coordinated attacks) against Jews throughout Nazi Germany and parts of Austria on 9–10 Nov 1938, carried out by SA paramilitary forces and non-Jewish civilians. German authorities looked on without intervening. The name Kristallnacht comes from the shards of broken glass that littered the streets after Jewish-owned stores, buildings, and synagogues had their windows smashed. At least 91 Jews were killed in the attacks, and 30,000 were arrested and incarcerated in concentration camps. Jewish homes, hospitals, and schools were ransacked, as the attackers demolished buildings with sledgehammers. Over 1,000 synagogues were burned (95 in Vienna alone) and over 7,000 Jewish businesses destroyed or damaged. Martin Gilbert writes that no event in the history of German Jews between 1933 and 1945 was so widely reported as it was happening, and the accounts from the foreign journalists working in Germany sent shock waves around the world. The Times wrote at the time: “No foreign propagandist bent upon blackening Germany before the world could outdo the tale of burnings and beatings, of blackguardly assaults on defenseless and innocent people, which disgraced that country yesterday.” The pretext for the attacks was the assassination of the German diplomat Ernst vom Rath by Herschel Grynszpan, a German-born Polish Jew resident in Paris. Kristallnacht was followed by additional economic and political persecution of Jews, and is viewed by historians as part of Nazi Germany’s broader racial policy, and the beginning of the Final Solution and The Holocaust. The violence was officially called to a stop by Goebbels on Nov 11, but violence continued against the Jews in the concentration camps despite orders requesting “special treatment” to ensure that this did not happen. On Nov 23, the News Chronicle of London published an article on an incident which took place at the concentration camp of Sachsenhausen. Sixty-two Jews suffered punishment so severe that the police, “unable to bear their cries, turned their backs”. They were beaten until they fell and, when they fell, they were further beaten. At the end of it, “twelve of the sixty-two were dead, their skulls smashed. The others were all unconscious. The eyes of some had been knocked out, their faces flattened and shapeless” The 30,000 Jewish men who had been imprisoned during Kristallnacht were released over the next three months but, by then, more than 2,000 had died. Hermann Göring met with other members of the Nazi leadership on 12 November to plan the next steps after the riot, setting the stage for formal government action. In the transcript of the meeting, Göring said, ‘I have received a letter written on the Führer’s orders requesting that the Jewish question be now, once and for all, coordinated and solved one way or another.. I should not want to leave any doubt, gentlemen, as to the aim of today’s meeting. We have not come together merely to talk again, but to make decisions, and I implore competent agencies to take all measures for the elimination of the Jew from the German economy, and to submit them to me.’ In an article released for publication on the evening of Nov 11, Goebbels ascribed the events of Kristallnacht to the “healthy instincts” of the German people. He went on to explain: “The German people are anti-Semitic. It has no desire to have its rights restricted or to be provoked in the future by parasites of the Jewish race.” While Nov 1938 predated overt articulation of “the Final Solution” it foreshadowed the genocide to come. Around the time of Kristallnacht, the SS newspaper Das Schwarze Korps’ called for a “destruction by swords and flames.” At a conference on the day after the pogrom, Hermann Göring said: “The Jewish problem will reach its solution if, in any time soon, we will be drawn into war beyond our border then it is obvious that we will have to manage a final account with the Jews.”
Read More http://www.historyplace.com/worldwar2…
http://www.youtube.com/watch?v=3JZKlQ…
http://www.youtube.com/watch?v=3U2piW…
FAIR USE NOTICE: This Video may contain copyrighted (© ) material the use of which has not always been specifically authorized by the copyright owner. Such material is made available to advance understanding of ecological, political, human rights, economic, democracy, scientific, moral, ethical, and social justice issues, etc. It is believed that this constitutes a ‘fair use’ of any such copyrighted material as provided for in section 107 of the US Copyright Law. In accordance with Title 17 U.S.C. Section 107, this material is distributed without profit to those who have expressed a prior general interest in receiving similar information for research and educational purposes.

This Day in Jewish History, 1925 The Russians Murder the Real James Bond. What exploits Sidney Reilly really got up to, or didn’t, remain shrouded …

From Wikipedia
Sidney George Reilly (c. 1870 – c. 1880 – c. 1925), commonly known as the so-called “Ace of Spies”, was a secret agent of theBritish Secret Service Bureau, the precursor to the modern British Secret Intelligence Service (MI6/SIS).[1] He is alleged to have spied for at least four different powers.[2] ++++++
According to Rosenblum, in 1892 the Imperial Russian Secret Police arrested him for being a messenger for a revolutionary group, the Friends of Enlightenment. After he was released Grigory,his assumed father, told him that his mother was dead and that his biological father was her Jewish doctor Mikhail A. Rosenblum. Renaming himself Sigmund Rosenblum, he faked his death in Odessa Harbour and stowed away aboard a British ship bound for South America.

11.10.2015
Four people have been stabbed in another knife attack in Israel.

It happened near a bus stop not far from the northern city of Hadera.

Muslim Student Challenges Jewish Professor, He Shuts Her Up On The Spot

The Blums of Eli

21.01.2014
An interview with Gedaliah and Elisheva Blum, Jewish residents of Eli in Judea and Samaria (“settlers.”) They started a business selling items made in their area, that was featured in a New York Times article.

What is the Miracle of the First Day of Chanukah? – Rav DovBer Pinson

So many miracles, which is the greatest?
Rav Pinson presents one of the miracles of Chanukah from his huge reservoir of Chassidic and Kabbalistic knowledge. For more wisdom on Chanukah see Rav Pinson’s book: “Eight Lights: Eight Meditations for Chanukah”

Scion of a Great ‘Lithuanian’ Dynasty Passes Away

Haaretz http://www.haaretz.com/news/features/this-day-in-jewish-history/1.679418
This he did, while also organizing around him a study circle that included … establishment of a Jewish state – on the grounds that a secular Jewish state in … In this, his community of Briskers was allied with the city’s strictest … today exist in Jerusalem: the flagship institution in the central neighborhood of … 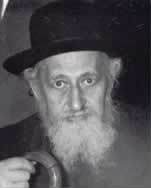 From Wikipedia
Yitzchok Zev Halevi Soloveitchik (Hebrew: יצחק זאב הלוי סולובייצ’יק), also known as Velvel Soloveitchik (“Zev” means “wolf” in Hebrew, and “Velvel” is the diminutive of “wolf” in Yiddish) or as the Brisker Rov (“rabbi of/from Brisk”, (19 October 1886, Valozhyn – 11 October 1959, Jerusalem), was an Orthodox rabbi and rosh yeshiva of the Brisk yeshiva in Jerusalem, Israel. He was a son of Rabbi Chaim Soloveitchik of Brisk. He is also commonly referred to as the GRYZ, an acronym for Gaon Rabbi Yitzchak Zev (“sage Rabbi Isaac Wolf”) and “The Rov”. 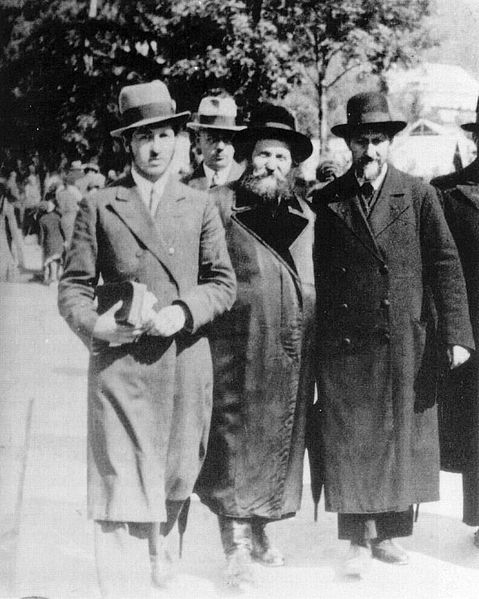 07.03.2015
A WA is a band formed by 3 sisters who combine Yemenite folk singing with electronic dance music